We use cookies to help the site function properly and to analyse traffic. By continuing to browse the site you are agreeing to our use of cookies. For more information please review our Privacy Policy.
Every item in our store is an original vintage midcentury production
We only sell genuine originals, no reproductions or reissues

We ship worldwide. Every item is packed with care to ensure that it reaches you safely. 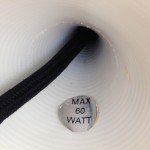 Designed in 1967 by Claus Bonderup and Torsten Thorup and put into production by Fog & Mørup while the design duo were still students, the Semi proved to be an immensely popular light and remained in production for the rest of Fog & Mørup's existence and beyond. An article in a 1973 edition of Mobilia magazine described the process by which each Semi was hand-produced. “A flat, lifeless sheet of metal is given one almighty thump by an automatic power press, surface-ground to produce an absolutely smooth texture and spray-painted to ensure a superior finish.” Fog & Mørup recommended the use of a crown silver bulb to achieve the optimum light distribution and prevent glare. This example is the rarely seen glossy red version in the 38 cm diameter version with a height of 19 cm. It is in near-mint condition with just a tiny mark to the paintwork (see photos) and carries its original wattage label which Fog & Mørup aficionados will recognise as the trademark circular silver-and-black label used by F&M in this period.