In November 1966 Danish homestyle magazine Bo Bedre published a feature by Kirsten Bundgaard in which Poul Henningsen offered his thoughts on lighting in the home. We have translated these pearls of wisdom from their original Danish (below). 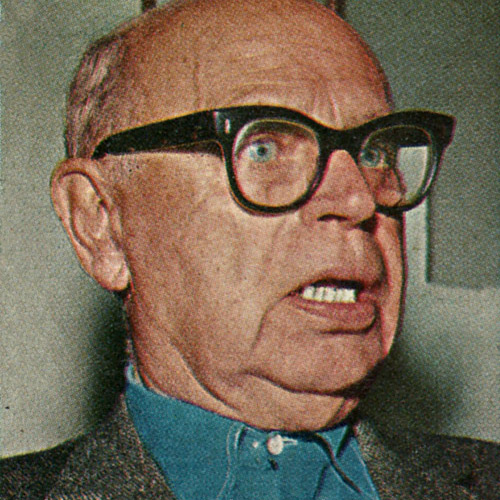 About the colour
It is a misconception that artificial light must be an imitation of daytime sunlight, for it is not intended that day and night should be the same. We do not thrive on it.
Admittedly, we have lights at night – we humans are frightened by total darkness. But when our forefathers huddled around the bonfire in the evening, it was for the heat, including the visually-perceived warmth of the fire flames, which provided security and protection against the darkness around it.
Warm light changes the surroundings – the 'cold' bluish colours are not as prominent. Man thrives better.

About fluorescence
The fluorescent tube is still, in its present form, a mistake. Certainly it is strong: it casts bright light uniformly across the room. But it changes the surroundings in an erratic manner.
Girls are not pretty in fluorescent lighting. However, they are lovely in the glow of an incandescent lamp or candles.
Is there anything worse than coming into a house where the rooms are lit nicely, but a numbing light shock emanates from a pair of unforgiving fluorescent lights whenever the kitchen door opens? This is not a nice scenario for a family home!

On the distribution of lamps
Proper lighting is simply having as much (or as little) light as you need and feel comfortable with – and having it in the right places.
You have to have many lights in a house, and you should feel a new lighting experience with each lamp. Lamps should be exciting.
Light in a work area can obviously be brighter than elsewhere – but the rest of the room should not lie in the dark. There must still be small bright islands around, but with slightly more subdued areas in between.

About as little light as possible
The ugliness in the world is an over-lit space. Man cannot thrive in a sea of light, yet we are increasing the light-barbarism from day to day.
This is probably because of the old fallacy that you see more and better in a room that is bright and dazzlingly illuminated. This is not, however, the case, due to the human eye’s ability to adapt. The eye automatically reduces its retinal sensitivity when exposed to strong light, whereas it becomes more sensitive in a subdued light.
Sight does not improve because the illumination is increased – you just guard against the intense light by reducing the eye’s sensitivity. Think of the products that ancient craftsmen were able to make – small, meticulous things like filigree work – just by the glow of a candle…

About lighting contrasts
The eye cannot of course be prepared to respond at two levels of sensitivity at once. In a brilliantly lit kitchen, where the eye has adapted itself by closing down its response to light a little, it can be almost impossible to see what lies, for example, at the bottom of a deep, dark drawer. Thus it is much easier to see where the contrasts are not too great.

About pale floors
It is important to remember that light that falls down will diffuse up again in the form of glare from bright surfaces – pale floors or carpets, light table surfaces. It was bright fabrics that made sitting around the family table with a kerosene lamp so nice. A dark ceiling above, and pale floors and table surfaces beneath!
Oh, certainly we have done the opposite for many years, but this is the right thing and the most comfortable.

About dark walls
In a dark room – with dark walls, furniture etc – you can make do with less light. It does not take much to provide adequate contrast. In a room with bright colours it takes relatively more light to achieve the same degree of contrast.
Luminous efficiency consists of contrasts – if there were no contrast of things, one could not perceive them. But the contrast must never become so great that light dazzles.
I once made a completely dark kitchen. We still have one today in our house. Not black now, but there is very dark woodwork and the counter top is laboratory stained. There’s not much light there, but it is good light. Warm light. There is no discomfort when you move your eyes from the intensely lit stove to the darker sections. And it keeps both food and cooking a good healthy colour.

On the strength of lighting
We must be careful not to fall into light addiction just because lighting equipment manufacturers increase the numbers in their tables year on year. Once it was said that a power consumption of 10 watts per square metre was sufficient. Now it is as high as 20 to 40 watts. In the lighting set-up in my own room I should I think have a total of 400 watts. I would prefer to have 250 watts, but my wife and I agreed on 350 watts. This is equivalent to somewhere between 10 and 15 watts per square metre in large and small lamps.

Large and small bulbs
A 25 watt or 40 watt bulb gives a warmer and a more pleasant light than a 100 watt bulb. If you must use the whiter light of the larger bulb, you can place it behind a screen with warm colours, or you can make sure the light falls on a surface – such as a table – with warm, light colours. The human eye is more accustomed to warm colours, and we thrive better with them.

About lamps – and ladies’ hats
There are unfortunately architects creating ladies’ hats instead of lampshades – and who have been happy to stretch an empty 10cm tin and call it a lamp. I wish that architects would think more about function than making 'interesting' shapes.
But that will probably only happen when the consumers themselves break out of their traditional perception of light and begin to make demands for quality on those manufacturers who are more or less forced to fabricate on demand.
And that will happen only when consumers close their ears to the publicity drums, which have only the echo of the sales tills in mind.