A tale of two Topans: the Pendant & the Spot

Verner Panton’s futuristic 1959 Topan light design for Louis Poulsen has rarely been out of the limelight in its more than 50 years of existence. Frequently copied and never out of style, the clipped sphere has stood the test of time and is an undisputed design classic.

Also largely forgotten today is the fact that both Topan models were available either with or without a metal grille to shield the bulb. Of the Topan models available in the mid 1960s, numbers 16570 and 16571 were Topan Pendants without and with grille respectively, while 16572 and 16574 were the Topan Spot equivalents. 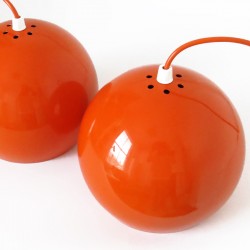