We use cookies to help the site function properly and to analyse traffic. By continuing to browse the site you are agreeing to our use of cookies. For more information please review our Privacy Policy. 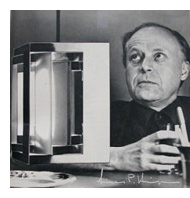 Whether lighting designers are born or made, Simon P Henningsen (1920–1974) seems destined to have become one. Son of the prolific Danish architect, designer, critic and author Poul Henningsen (1894–1967), Simon grew up in an exceptional home through which the cultural elite of the day flowed and where, in a lighting laboratory in the attic, his father carried out meticulous experiments into the spreading and shading of light.

At the Paris International Exhibition of 1925, when Simon was five years old, Poul Henningsen's breakthrough came when he presented the first of what was to become an enormous output of revolutionary lights. 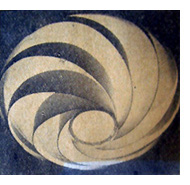 Over the next 40 years, Poul Henningsen's lamp designs became so deeply woven into the fabric of Danish culture that they acquired their own collective noun: PH-lamps.

So when Simon P Henningsen created his own first light in 1954 (see left) and it was presented in the press, it was predictably dubbed an SH-lamp. Simon modestly said, “My shade isn't composed nearly as scientifically as those of my father,” which was true, but perhaps also an understated way of saying that he was not his father, and had something quite different to offer.

As designers the two men spoke different languages, and this was apparent in the whirls, cylinders and flower shapes of Simon's 1950s designs – lights that are probably all now lost, existing only in faded newspaper clippings (see, for example, his Day Light for Plants from 1959, right).

Naturally there were also parallels between father and son. Simon studied architecture during the war, and – like his father – never made it to final graduation before becoming involved in practical work and experiments. During the war years the young Simon helped his father create a stage structure in the form of a seashell in Copenhagen's Tivoli Gardens, and in 1945 the pair worked together in reconstructing the bombed Tivoli Glassalen.

During this time Simon became infatuated with the atmosphere of this flowering leisure park, and applied for the position of Tivoli architect when it was offered in 1948. He got the job, and over the next 25 years the special aesthetics of Tivoli became a vehicle for his experiments in design. The position meant he had the overview of the garden's visual aspects – its layout, buildings, structures, restaurants, shops, and not least its lighting, in which he immediately banned the use of fluorescent tubes.

While Simon's influence meant that the next decades saw a radical change in the style of Tivoli in the direction of modern design, his work was not applauded without reservation in the Danish architect community. Tivoli was seen as theatre, not the real thing. 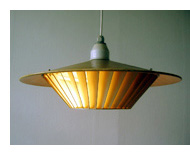 But for Simon Henningsen the place was exactly the kind of playground that would inspire the unorthodox creations for which he is remembered today.

Simon P Henningsen died at just 54 years of age, so his active career was relatively short, and the lights he designed emerged from a period spanning only a decade, from the mid 1950s to the mid 1960s. So in contrast to his father he created only a good handful of lights, and probably didn't see himself primarily as a lighting designer. His life's work was Tivoli, and the lighting designs were just one part of that project.

The first light Henningsen created for Tivoli was the abovementioned SH-lamp, designed in 1954 for the park's Divan 2 restaurant to hang over tables indoors and over flower arrangements outdoors. In 1955 the Hanging Gardens were constructed alongside the lake, and garden architect Eywin Langkilde designed decorative containers for the flower beds which appeared to float in the air, while Simon Henningsen provided the lights to illuminate them. An example of these lights, pictured above right, now hangs over the kitchen table of Simon's widow Bente, who married Simon in 1944 and who generously provided much of the information on which this profile is based.

In 1958 Henningsen created the flowerlike Tivoli Havelampe (see left), a garden illumination that was first made popular in Tivoli and later put into production for use in domestic gardens. It was the beginning of Simon's collaboration with Danish lighting company Lyfa, who distributed his lights through the 1960s and beyond.

In 1959 he designed a lamp with infrared heating elements (below left), to be used for prolonging the outdoor season in Tivoli. Like the garden lamps, this was a novel idea at the time. The heating lamp was put into production by Fog & Mørup, with whom Henningsen had a short connection before starting to work with Lyfa, and was advertised for indoor use as lighting as well as heating.

In the same year there is newspaper coverage of the Day Light for Plants (see image above, second from top right), Henningsen's cylindric pendant light intended as a daylight source for plants in dark corners. 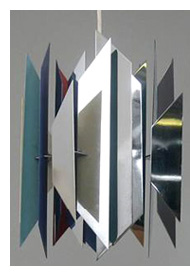 The extension was arranged much like a theatre production. An old Moresque tapestry that had been used in the restaurant in the past was taken out of storage and reinstated as a decor element. The various eating areas were framed by walls that could drop down into the cellar, making the room sizes flexible.

When on a given day the layout was determined and the furniture was put into place, the specially designed Divan 2 lights (see right) would descend from the ceiling over the tables.

A multitude of the lights hung up there, ready to fit the many possible table arrangements. A long glass wall looking onto the lake offered a spellbinding view of the twinkling park mirrored across the water in the evening, and when the time came for the late-night fireworks outside, the lights over the tables would be dimmed and elegantly glide back up to the ceiling. When the fireworks were over, the lights would descend to the tables again.

The Divan 2 light can be said to be Simon P Henningsen's final break with any remaining likeness to his father. It has been called the vertical PH-lamp, because of the way its shining metal pieces are organised along vertical lines in direct opposition to PH's horizontal axis. 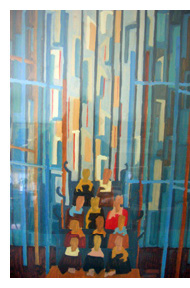 Colourwise, its primary reds and blues combined with mirroring blankness could not be more in contrast with PH, who cherished the dark, natural shine of metals and earthy colour tones. Furthermore the rhomboid form of the metal blades with their dagger-sharp ends would have been alien to the father, a master of the rounded and harmonious.

A room packed with Divan 2s was a powerful theatrical statement – the colourful blinking shimmer around each light creating a magical atmosphere that could dissolve into thin air at the push of a button. The effect was similar to the crystal prisms that graced the halls of Tivoli in earlier times, or the colours of the harlequin costumes at the nearby historic Pantomime Theatre.According to Bente Henningsen, another source of inspiration was a painting that hung in the Henningsen home,

of a stage decor for Richard III (Royal Theatre 1951, by Erik Nordgren, above right), which has similar rhomboid forms and shimmering colours.

Divan 2 was as sharp as a weapon, and demanded to be treated with respect. 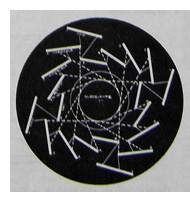 More than a few diners experienced what could happen if, after a quantity of good wine, they leaned too far forward while trying to get up from the table – a dagger in the scalp, and off to the emergency room. But for Tivoli and Copenhagen, the light and its surroundings were the sensation of the 1962 season. Lyfa put the light into general production immediately and it soon became a commercial success, first in Denmark and later for export. It was produced in two sizes: 25 x 31.5cm and 35 x 38.5 cm respectively, both of which were included in the arrangement of the restaurant (see newspaper clipping above). In 1963 it was exhibited at the Louvre in Paris and in 1964 it was installed in Georg Jensen's 5th Avenue store in New York. Meanwhile it received several national and international prizes. 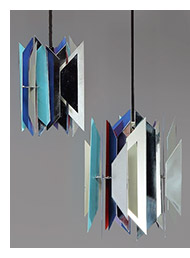 In the years 1963 to 1965 Simon Henningsen expanded his cooperation with Lyfa to go beyond lights created directly for Tivoli. He designed the cube-shaped and labyrinthine Kassablanka (see below left and top right), perhaps for use in one of the restaurants for which he was creating interior designs during these years, and this too was soon put into production by Lyfa. 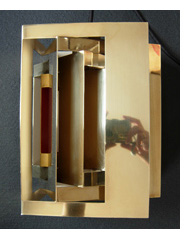 The shining brass exterior of this lamp, its rectangular lines and the glimpses of red through the multiple openings into the interior layers – much like a hanging mobile – present, like the Divan 2, a dimmed, theatrical light source ideal for the intimacy of a small restaurant. A special edition of 200 Kassablankas in chrome was also produced, with a multicoloured interior by Danish artist Ole Schwalbe, each lamp individually numbered and signed by the artist (see below right).

Bente Henningsen reveals that the name Kassablanka came from her. Simon worked on his design concepts at home in their 1950s villa (designed by him) to the north of Copenhagen, and he would often involve Bente in the process. The name was a lighthearted pun on the Danish phrase “shining box”, sounding similar to the name of the Moroccan city and also the name of the road where Lyfa was located, Blanka Road. 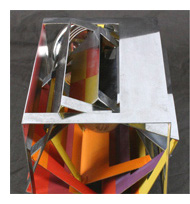 Both Divan 2 and Kassablanka were complex and expensive to produce, so Simon Henningsen responded to a request from Lyfa to design a light that was less costly. He simply put two folded rectangular metal plates together to cover the bulb, one red and one black on the outside, both white on the inside, for hanging as a pendant light or just standing on a table (see left). 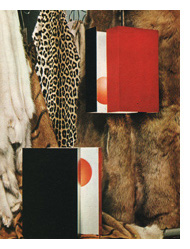 Its name, Nippon, indicates an oriental inspiration, and the result was certainly zen-like in its expression. But again, the name wasn't intended to be taken literally. Simon is quoted as saying: “In the first version we had just white inside, but the light became too cold. So we added the orange sun for softening. Well, then the name came by itself...”

Henningsen continued to design exteriors and interiors for Tivoli, and also for other amusement parks, restaurants and bars. But no more lights were put into production. From Lyfa documents it is known that the four Simon P Henningsen lights (Tivoli Havelampe, Divan 2, Kassablanka and Nippon) sold well both in Denmark and abroad, the Divan 2 in the thousands despite its hefty price-tag, the others in slightly smaller quantities. 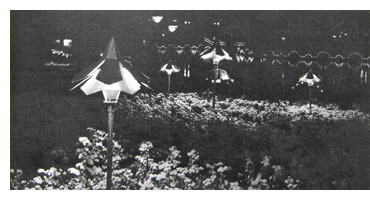 As a result of growing international interest in his designs today, it is not uncommon to see other lights being attributed to Simon Henningsen. The truth is simple: there are only the four Lyfa designs likely to be found in circulation today. The good news is that out of the four it is the most spectacular – the Divan 2 – that is easiest to find, which means quite a few lighting enthusiasts will still have a chance to acquire and enjoy the brightest star in Simon P Henningsen's theatrical lighting universe.